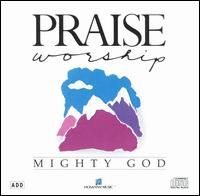 (c)1989 Integrity Music
Another one that's among my all-time favorite Integrity releases and probably my favorite of the ones who only did one album for the label. This album, "Mighty God", features lead vocals by J. Daniel Smith (a Fort Worth-based musician who worked mainly on the production end of things; including production work with singers associated with James Robison when Robison was an itinerant preacher such as Robison's daughter Rhonda and longtime worship leader Jeanne Rogers), was recorded at Bethesda Community Church in Fort Worth, TX and was released around July 1989.
TRACKLIST
1. Lift Up Your Voices
2. My Help Comes From the Lord
3. Mighty is Our God
4. Great and Mighty is He
5. Hosanna! Hosanna!
6. Praise Him
7. He is the King (for some reason the digital versions have the track division between Praise Him and this song during the repeated chorus of the former)
8. Awesome God (probably one of the first covers of the Rich Mullins classic {from 1988's "Winds of Heaven, Stuff of Earth"}, and almost certainly one of the first to use the version with just the chorus)
9. He Who Began a Good Work (originally recorded the previous year by Steve Green and Kelly Willard {herself a frequent guest vocalist on Integrity and Maranatha projects at the time} on Green's 1988 album "Find Us Faithful")
10. God is the Strength of My Heart
11. Lord, You Are the Holy One
12. Thy Name
13. We Give Thanks
14. Holy, Holy, Holy